When you join the BSA family, you’re investing in a company with an unrivalled airgun pedigree and a worldwide reputation for quality, service and innovative design. We’re proud of that reputation and of the gunmaking heritage on which it was founded. While our history inspires us, we’re every bit as proud of our present range of products and even more excited about our future.

March of the Piled Arms

In a Little over a hundred years BSA has grown from a small union of gunsmiths to become one of Britain’s important industrial groups. The story is not entirely one of steady progress and expansion; there is drama and excitement too. And because BSA has served its country more directly than most private concerns, its story is also part of Britain’s history. To begin at the very beginning, however, it is necessary to go back much farther than a century – to the year 1689, infact, at the court of William and Mary. King William III, worried by threats of invasion, sharply criticised the practice of obtaining military weapons from Holland. He was overheard by Sir Richard Newdegate, an MP for Warwickshire, who immediately spoke up on behalf of his Birmingham constituents – among whom were many fine gunsmiths. The result was a trial order for five of the leading Birmingham smiths. It was satisfactorily carried out, and a firm contract was made between the Government and the quintet for the supply of 200 snaphance muskets a month “at seventeen shillings per piece, ready money”. 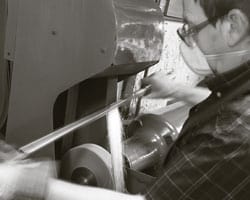 As an emblem of their craft they adopted the sign of three crossed rifles, which has since become world-known as the Piled Arms trademark. The object of forming a company was to begin making small amis by machinery to meet the growing competitionfrom the mechanised government factory at Enfield. A 25 acre site was bought at Small Heath, at that time just outside the Birmingham boundary, and two years later thefactory was in operation. By 1866 the company could record a profit of £7,000 and in a few short years -aided by the turbulent international politics of the time – it became the largest private arms manufacturer in Europe. One order from the Prussian government,then at war with Austria, was not for rifles but for cartidge cases – 40 million of them. Rather than turn it down the directors acquired a munitions factory andchanged the title to the Birmingham Small Arms and Metal Company Limited. This name was used until 1897, when munitions work was given up and the company reverted to its original title. The early prosperity was short-lived. As wars ceased the demand for weapons fell, and the private arms trade was the first to suffer. Towards the end of the 70’s, the Small Heath factory wascompletely closed for twelve months and the future looked impossibly dark. A small contract enabled the works to be opened again, however, and in 1880 fate took a hand in the shape of an inventor, a Mr. E.C.F. Otto, who had designed a strange type of bicycle with two large wheels on either side of the rider. He demonstrated it by riding on the boardroom table under the noses of the astonished directors – and so impressed them that they put the device intoproduction immediately. 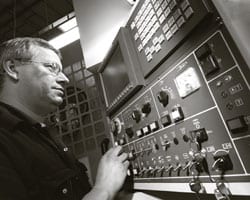 This first venture into the transport field was followed by more conventional bicycles and tricycles, but a sudden increase in the demand for rifles at the end of the 80’s caused the directors to dropcycle work. During the Boer War the company supplied many thousands of rifles to the British forces.

In the First World War the BSA factories were turned over almost entirely to munitions work. Huge quantities of service rifles, machine guns, military motor-cycles, and the world’s first folding bicycles were supplied to the troops. Right through the 30’s, BSA rifle production had been confined to comparatively small quantities of sporting weapons. The company’s considerableamount of arms plant had been maintained out of a sense of duty. It would take a book to describe fully the activities of the BSA organisation during the last war. 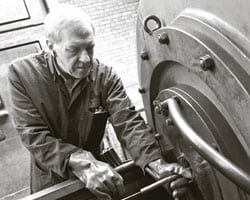 Apart from the company’s own factories in Birmingham, Coventry, Redditch, Sheffield and Co. Durham, many dispersal units and shadow factories were used for the purpose of arms production. The Small Heath administration alone (BSA Cycles Ltd and BSA Guns Ltd) controlled 67 factories, employing 28,000 people and containing 25,000 machine tools. This organisation produced more than half the small arms supplied to Britain’s forces during the war. BSA’s war production included nearly half a million of the Browning machine guns with which RAF Spitfires and Hurricanes won the Battle of Britain; one and a quarter million service rifles; 400,000 Sten guns; machine guns, cannon, anti-tank rifles, and gun carriages, ten million shell fuses,over three and a half million magazines, and 750,000 anti-aircraft rockets. Several Group factories were heavily bombed and at Small Heath more than 50 employees lost their lives. At this works alone, more machine tools were destroyed or damaged by enemy action than were lost in the whole of the Coventry blitz. Although the company no longer makes military weapons, BSA Guns Ltd maintains a steady flow of air rifles, hunting rifles and sporting guns to most parts of the world, exporting 557 of its manufactured products.